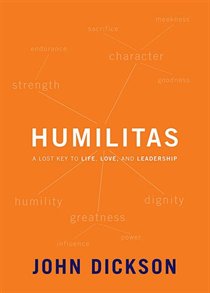 The presentation by John Dickson at the WCAGLS was one of my favorites of the summit. The presentation was entitled “Humilitas,” and was based on his most recent book, which is titled Humilitas: A Lost Key to Life, Love, and Leadership. Dickson is a writer and speaker, a Senior Research Fellow at Macquarie University, and Co-Director of the Centre for Public Christianity in Sydney, Australia. His presentation at the summit was geared towards leaders, obviously, so the thesis of his talk was, “Humility makes the great greater.” Dickson’s presentation set out to convince the audience of this thesis.

If we’re going to be convinced humility makes the great greater, we should all have a common understanding of exactly what is meant by the word. Humility is not the same thing as humiliation, even though the two words share a similar root (humilitas). The difference between humiliation and humility, which both involve being lowered, has to do with how a person is lowered. Humiliation involves a forcible lowering, as in being defeated in battle. Humility involves a person lowering him or herself. Dickson gave the following definition of the word: Humility is to hold your power in service of others.

So, now that we know what is meant by humility, why should a leader develop it in his or her life?

Five reasons to Cultivate Humility in Your Life

Being humble is common sense, especially in the arena of knowledge and expertise. None of us, no matter how knowledgeable knows everything. In fact, the more we know in one thing, the more aware we are of how much we do not know about everything else. “What we don’t know far exceeds what we do,” says Dickson.

In the same vein, none of us is in an expert in everything. Expertise in one area counts for very little in another. A leader who believes that since they were successful in one arena of business, they will automatically be successful in another on their own merit as a leader will likely find themselves out of a job. Dickson used a great term for the belief just described, “competency extrapolation.” Competency extrapolation is thinking you can move your expertise in one area to any other area. This type of belief does not equal humility.

People are drawn to a humble leader. “In Western culture today, we are more attracted to the great who are humble than the great who know they are great, and want us all to know it too,” said Dickson. But, humility has not always been regarded as beautiful. In the ancient world, humility was understood and regarded as “morally suspect.” To pursue your honor, rather than showing humility was a great good.

So what changed between then and now?

As it turns out, a “humility revolution” took place in the middle of the first century. Jesus, the rabbi from Nazareth’s teaching, actions, and actual crucifixion, as well as his disciples’ emulation, is what redefined humility as a character trait of greatness. “If the greatest man who ever lived sacrificed himself willingly, then greatness must be found in willing sacrifice,” said Dickson.

The first text in history to connect humility to greatness is found in Paul’s letter to the Philippians. Philippians 2:3-8 says, “Do nothing from selfish ambition or conceit, but in humility count others more significant than yourselves. Let each of you look not only to his own interests, but also to the interests of others. Have this mind among yourselves, which is yours in Christ Jesus, who, though he was in the form of God, did not count equality with God a thing to be grasped, but emptied himself, by taking the form of a servant, being born in the likeness of men. And being found in human form, he humbled himself by becoming obedient to the point of death, even death on a cross.”

Our culture has been massively influenced by the cross of Christ. The attraction Western culture has towards humility comes entirely from Christian tradition. Our culture remains exclusively cruciform despite not being explicitly Christian.

The act of humility is actually creative.

Dickson believes the development of modern science was spurred by the normalization of humility. During the presentation he referenced a book by Peter Harrison, Professor of Science and Religion at the University of Oxford, called The Fall of man and the Foundations of Science. In the book, Harrison describes how theological discussions in the 16th and 17th centuries on the subject of how the fall of man affected the cognitive abilities of modern man was key to the development of scientific methods. These methods were implemented in order to alleviate the effects of sin on the mind and senses. Dickson argues that, “the scientific revolution is the result of a humility revolution. Humility generated science.”

Every leader is in the persuasion business. Aristotle, in his book on ethics argues that a person needs three things to persuade: logos (intellect), pathos (emotion), and ethos (character of the persuader). It is the presenter’s ethos, or character, that is the most important.

To elaborate on the point, Dickson told a story about a time when he was filming a documentary. Over the course of filming the documentary he was able to interview many brilliant professors, writers, and thinkers, all who he greatly respected. During a break in one interview, Dickson described how the professor being interviewed offered tea to the film crew and others on the set. He took everyone’s orders and disappeared. After some time the professor reappeared with everyone’s orders, which he had prepared personally, much to everyone’s astonishment. Dickson said the surprise was due mainly to the assumption that such a renowned figure would simply pass the order off to an assistant, rather than take the time to personally attend to the needs of every person who was a part of the production on that day.

Dickson then went on to describe a situation sometime later where he was writing an article on some “mundane theological topic.” While trying to sort out his thoughts on an idea being presented in the article, he picked up a book by the “tea professor.” While reading the professor’s thoughts on the subject, Dickson found himself agreeing with the professor’s line of reasoning. Then it hit him. Dickson said, “I am completely biased toward this professor’s thoughts.” The most persuasive person in the world is the person who you believe has your best interest at heart.

Dickson said, “When leaders appear aloof and unapproachable we admire them but generally don’t emulate them. But when a leader is accessible, a person feels they are real and wants to emulate them.”

He then outlined four tools of leadership: ability, authority, character, and persuasion. Some of the most inspiring people in history were missing key skills, but they had truckloads of character and persuasion. A person who doesn’t necessarily have much authority in an area can have a real impact and inspire people to action through character and persuasion. Dickson said, “You don’t need the keys of the kingdom to impact the kingdom. You don’t have to reclaim a Christian nation to win a nation back to Christ, but you do need character, persuasion, and ability.”

It is important to remember that humility is not just another leadership technique. Humility is a reflection of the deep structure of the reality of the universe. That at the center of history, at the center of everything, is the most beautiful act of humility ever accomplished. The cross of Christ.

God is Great, Beer is Good, People are Crazy... END_OF_DOCUMENT_TOKEN_TO_BE_REPLACED
This entry was posted on Monday, November 7th, 2011 at 9:21 pm and tagged with Humility, John Dickson, Leadership, Peter Harrison, WCAGLS and posted in Big Ideas, Christian Thought, Leadership. You can follow any responses to this entry through the RSS 2.0 feed.
« WCAGLS: Len Schlesinger – Action Trumps Everything
Boomerang: Travels in the New Third World »